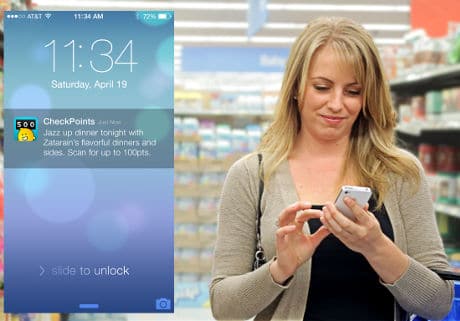 Shoppers who receive marketing messages via inMarket’s Mobile to Mortar (M2M) iBeacon platform interact more with advertised products, increase their in-store app usage and are more likely to keep an app on their phone, a survey of 25,000 US consumers has found.

The controlled sample of 25,000 shoppers with an inMarket-enabled app on their mobile phone found that, over a 30-day period in April and May 2014:

“With today’s data release, we now have proof that consumers appreciate this value in a measurable way: They are more likely to keep apps that use beacon messaging, more likely to interact with advertised products in-store thanks to beacons,” says Todd Dipaola, CEO of InMarket.

InMarket’s beacon-enabled apps enable shoppers to create shopping lists, earn rewards and receive offers from merchants and brands. Notifications then pop up on the lock screen of the consumer’s device when they visit a participating store.

A video shows the three elements of the service in action:

The service launched in January 2014 with beacons placed in some 150 stores in Seattle, San Francisco and Los Angeles. Participating retailers include Safeway and Giant Eagle supermarkets while clients include Coca-Cola, Kraft, Levi’s, Nestle and Procter & Gamble.

“The network is retailer-agnostic, so we can work with brands in almost any grocery store in the country,” DiPaola told NFC World+ when the service launched in January. “We are aiming to be in thousands of stores by the end of the year.

“iBeacons improve the shopping experience and increase the relevancy of in-store marketing. Billions of dollars are being spent annually on print circulars that completely miss the prime millennial demographic; InMarket gives brands the opportunity to become relevant to the modern family again.”