Think&Go NFC has launched Dynamic NFC-Screen, a combined video display and smart poster that enables consumers to interact with promotional and informational videos.

The display includes a series of dynamically changeable NFC tags, allowing marketers to provide a way for consumers to collect coupons, further information about a product and purchase promoted items by bringing an NFC phone into close proximity with the screen. 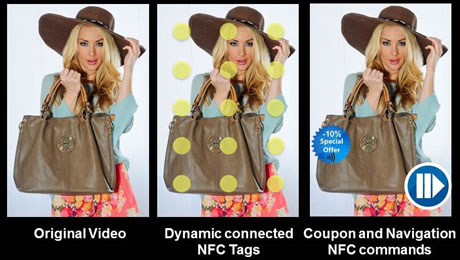 The patent-pending Dynamic NFC-Screen contains a matrix of dynamic NFC tags that are driven by the same computer that provides the video content. The number of tags that can be included depends on the size of the screen.

“Any combination of the multiple active NFC tags can be highlighted on the video display and the NFC content and video content change dynamically and synchronously,” says Think & Go. “The Dynamic NFC-Screen can also read the identity of the NFC phone, allowing total personalization of content for the individual user who chooses to opt-in.

“Because the communication is bidirectional, screens can track what’s happening (who is doing what, when and where), there’s no need for 3G or WiFi to exchange data between screen and the user and the screen delivers big data back to a dashboard.”

“A very basic use would display a sequence of videos presenting fashion items with target marks allowing consumers to access more information or an m-commerce site to buy the product,” the company explains. “The perfect local synchronization between image and multiple NFC function makes campaigns easy to build, but also opens a path to totally new interactive scenarios.”

Coupons could be hidden in interactive games or questionnaires and can also become dynamic, changing value with time or according to the profile of the individual consumer, Think & Go suggests. Consumers could also use the technology to navigate through a product catalogue and directly order products that are presented — the Dynamic NFC-Screen is also fully integrated with Think&Go’s NFC-Shopping solution.

“Picking up a wide range of information from digital screens has never been so easy and natural”, says Vincent Berge, CEO of Think&Go NFC. “It opens a new range of usages that only NFC technology can trigger”.

QR codes can also be included for non-NFC phone users but, says Think & Go’s Tim Baker, “QR codes are more intrusive on the image which is one of the reasons why the Dynamic NFC-Screen is so attractive for advertisers. QR codes could be used to pick up coupons and purchases, but not for navigation, neither can they be used to read the user’s identity and therefore display personalized content.”

A video produced by Think & Go NFC gives an idea of how the technology could be used by marketers:

The technology will be on show at the Mobile World Congress in Barcelona next week, on the Avenir Telecom stand (5E91). A small number of Dynamic NFC-Screens will be available in Q2 2013 with production quantities planned for Q4 2013.