The Austrian bank’s CardMobile service allows low value transactions to be aggregated, removing the need for each transaction to be authorised individually while still keeping a full audit trail of purchases made.

An NFC payments service being field tested by Raiffeisen Bank International (RBI) could lead to merchant transaction fees being reduced by as much as 70%, the Vienna-based international bank has told NFC World.

Raiffeisen’s CardMobile service combines Visa’s V Pay debit card solution and payments technology developed by Cardis International and has been on trial since July with staff of RBI’s local subsidiary, Raiffeisenlandesbank Oberosterreich, in the Austrian city of Linz.

For the trial, participants are using iPhones equipped with a by DeviceFidelity iCaisse sleeve containing an NFC microSD card. This stores both a Visa V Pay debit application and a Cardis stored value application, allowing the two services to work hand in hand:

Users can keep track of their CardMobile transactions through the ‘history’ tab in the CardMobile app as well as online.

“The Cardis solution offers a paradigm shift to the payment cards business model by introducing end-to-end transaction aggregation,” the Netherlands-based technology provider says. “This allows for reduction of the per transaction cost by enabling many individual low-value payment transactions to be aggregated into a single (higher value) debit card transaction, without the need for per transaction reconciliation (or shadow accounting), posting or processing at any point in the value chain.” 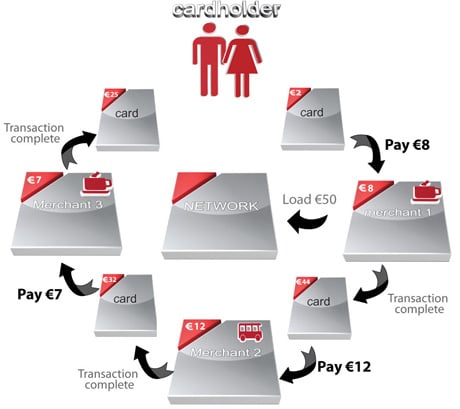 Fundamental to the Cardis concept is that it mirrors the existing ATM cash withdrawal process, allowing transactions to be made directly with the consumer’s bank at typical cash withdrawal levels rather than every time a small purchase is made, CEO Nebo Djurdjevic has told NFC World.

With Cardis, when a customer tops up their account with €50, the transaction is authorised online and the funds are transferred from the customer’s account to a float account managed by the Cardis account issuer — in this case, Raiffeisen — and the customer’s card/NFC application is then credited with stored value units to the same value.

When the customer makes a purchase, stored value units to the amount of the purchase are transferred from their Cardis balance to the merchant terminal and then stored in the POS device until the end of the day. All the day’s Cardis transactions are then batch uploaded to the back office processing system for settlement.

Key to the concept, says Djurdjevic, is the audit trail that the system provides. Cardis stored value units carry a unique serial number and each purchase generates a transaction certificate. Should a fraudulent duplicate or out of range unit be uploaded, Cardis can identify the ID of the terminal used to make the purchase, the ID of the terminal where the suspicious funds were added and the ID of the card/app used to make the transaction. “Any security breach would be spotted at the end of the day,” says Djurdjevic, providing a similar fraud spotting scenario to any offline payments system.

Cardis is also compliant with EMVCo‘s Dynamic Data Authentication requirements, Djurdjevic adds. “If you can break that, you wouldn’t use it to buy a coffee, you’d use it to buy a Rolex.”

“Retailers are especially pleased that with CardMobile they can settle even very small amounts affordably,” says Gerald Kubu, head of card services at RBI.  “The consumers, on the other hand, enjoy the speed and convenience of contactless payments, while they can monitor their purchases through the CardMobile payment app on their phone.

“People are using CardMobile on average three times a week for purchases with an average value of €4.20. The valuable experiences we are gaining during the launch phase of CardMobile and the technologies used will be incorporated in plans for further projects and rollouts on mobile phone and other forms of payment such as cards.”

“The scale of the cost saving depends on the distribution of CardMobile,” the bank told NFC World. “It is a matter of the economies of scale. We estimate that Cardis technology can allow a cost reduction up to 70% for small transactions.”