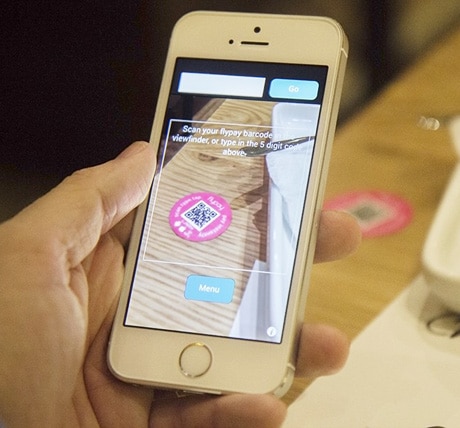 Flypay has raised £1 million from mobile payment specialist Entree Capital to further develop its restaurant-based mobile payment app, which uses NFC and QR codes to enable consumers to pay at their table at participating restaurants including UK-based chains Wahaca and Burrito Mama.

Customers tap the NFC tag or QR code on the Flypay sticker on their table, to bring up their bill. They then have the option of paying in full or splitting it, using a debit or credit card that has been preregistered to the service.

The solution, which aims to speed up payment and table turnaround times, is currently available as a standalone app in Wahaca, while Flypay has integrated its payment functionality into Burrito Mama’s existing mobile app.

“Once we do an integration with the POS system it’s quite straightforward,” Chris Evans, Flypay’s co-founder and CTO, told NFC World. “We supply staff with an app on an Android tablet that enables them to link the NFC tag to the table number by tapping on it.”

“We’re currently integrated with both Micros and Tissl systems. The Android devices are there as an extra solution as we actually directly tell the till system that that bill has been paid and the staff member doesn’t need to do anything.”

The company is also integrating with Zonal and NCR and has agreed “integrations with several other POS providers”. It will use the latest investment to scale and roll out its solution to “as many restaurants as possible.”

“We’ve had quite a number of calls from places, especially in Asia, but we really want to make the UK product great before we look at going anywhere else,” Evans said.

“We’re trying to get into as many restaurants as possible, as quickly as possible. We’re also looking at how we can scale and roll out quite quickly to a lot of big brands; we’ve got a lot of interest from major restaurants and we’re getting ready for that.”

He added: “Consumers like to be able to pay quickly and leave when they want to. Restaurants can get a much faster table turn if they can get people to leave five or ten minutes earlier, increasing their revenue and getting more information about their customers as well.”