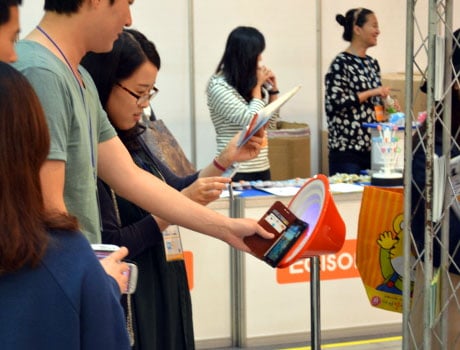 A radical new NFC touchpoint design, coupled with the offer of nationally redeemable rewards, led to consumer interactions increasing by a factor of more than 20 at a recent exhibition in Korea, SK Planet has told NFC World. The touchpoints are now to be rolled out to 10,000 Korean retailers from next month.

Twenty stands were equipped with the bright red horn-like touchpoints during the exhibition, enabling visitors to use their NFC phones to obtain product information and collect digital stamps that could be turned into OK Cashbag loyalty points.

OK Cashbag is a loyalty scheme run by SK Planet which enables its 36 million members to earn and use points at 50,000 merchant partners.

Overall, over the four days of the event, 4,700 visitors interacted with the touchpoints a total of 70,000 times — twenty times as many as took place during a similar event last year.

“NFC stickers are often used in Korea,” SK Planet’s Seonil Moon told NFC World. “Users rarely noticed the stickers in stores because they were very small and surrounded by other non-NFC stickers.

“However, our touchpoints successfully catch the customer’s attention through its unique ‘speaker’ design, even in a very crowded exhibition.”

“We are installing the touchpoints in 10,000 stores over a year starting from November as part of our national NFC non-payment service tied with OK Cashbag.”

“Users were not interested in digital coupons because they were for one time use and available in a number of other ways online. This time, users began thinking that they can gather OK Cashbag points through tapping more often to earn more points.”