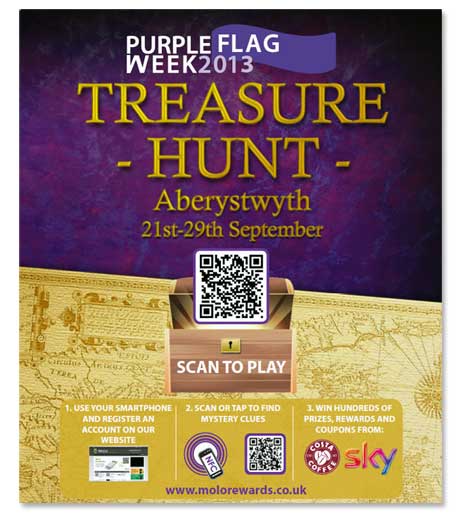 A group of leading UK retailers have participated in an NFC treasure hunt, developed by MoLo Rewards and the Association of Town & City Management. The contest is now set to be run in up to 100 towns during the Christmas 2013 shopping season.

Teaser posters were placed in participating retailers, inviting people to register with MoLo Rewards to participate. Once registered, consumers were taken to a landing page where they were told that their first clue would be issued to them at a particular time and date.

Once the first clue was revealed, the consumers visited the retailer behind the clue and located the Purple Flag Treasure Hunt smart poster, which incorporated an NFC tag and a QR code. This process was then repeated until they reached the end of the trail.

At each stage, consumers earned points for the actions and engagements they took. They could check their progress at any time and were informed when they had finished if they had earned enough points to be entered into a prize draw.

The top prizes included free Costa coffee for a year (a £750 voucher), a Sky goody bag (£200), and a gift voucher which could be used at a local independent retailer. The £200 voucher was also provided by Sky.

“Using NFC in a way of gamification brought a whole new approach to the technology,” MoLo Rewards’ COO Chris Davies told NFC World. “People are still trying to understand the importance of NFC and how it can benefit their daily mobile phone experience.

“By giving clues and offering rewards for using NFC technology, players were incentivized to try the technology. When we spoke to players who used NFC as part of their treasure hunt journey; they were surprised how easy it was to use, how fast it took to get to webpages and they wanted to know where else they could use it.”

He added: “Lots of people played in each of the towns and we have some really interesting data to use going forward. We are presently rolling out a Christmas treasure hunt in up to 100 towns.”