The smartphone maker’s new flagship device is the first to use Mobeam technology, allowing coupons, loyalty cards, gift cards, event tickets and more to be transmitted from the device to any of the 165m laser scanners installed in retail stores today. 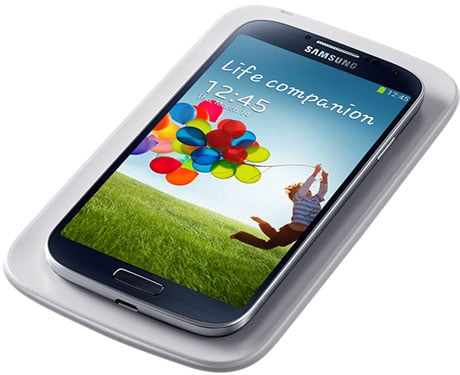 The Galaxy S4 packs a 5-inch full HD Super Amoled screen, 2GB of RAM and LTE. It also includes Bluetooth 4.0 and an IR LED, allowing it to be used as a remote control, as well as NFC and Mobeam 1D barcode technology. All Galaxy S4s will include a Visa payments applet, preloaded on an embedded secure element.

The Galaxy S4 also comes with a range of Samsung branded accessories, including a game controller that pairs with the smartphone via NFC and turns the device into a mini-console, a wireless charging pad, an extra battery kit and a range of healthcare accessories including an S Band activity tracker, a Body Scale and a heart rate monitor.

A Group Play feature allows multiple Galaxy S4 devices to be paired together to share content and create a multi-speaker sound system.

The addition of Mobeam‘s patented light based communications (LBC) technology makes it possible for coupons, loyalty cards, gift cards, event tickets and more to be transmitted from the device to any of the 165m laser scanners installed in retail stores today.

Mobeam “uses common light sources on a smartphone to send pulses of light directly to the sensor in POS scanners, mimicking the black-and-white sequencing of a standard bar code. Instead of reading the reflection from a printed barcode, laser scanners receive identical information from pulses of light – meaning that existing POS scanner technology and databases that are already installed worldwide won’t require any upgrades.”

“Making cutting-edge smartphones work with barcodes might not sound sexy, but it means consumers now have the ability to beam items such as coupons, loyalty cards, gift cards and event tickets at millions of locations – something that was previously impossible,” says Chris Sellers, CEO of Mobeam.

Mobeam has been working over the last year with consumer goods giants Procter & Gamble (P&G), Coca-Cola and General Mills to develop mobile couponing solutions that use its technology.

“We know that our consumers are increasingly on-the-go and looking for opportunities to simplify their lives,” says Laura Becker, general manager of P&G global business development. “We also know that they see coupons as a great way try new products or save on trusted brands their families have come to love. Delivering both – in other words, couponing on the go – through this new technology creates a double win for the shopper and with no added cost for the retailer.”

The Samsung Galaxy S4 will be available in 155 countries, starting at the end of April.