For the Australian launch of the latest edition of the best selling video game franchise, Microsoft has run an NFC-based scavenger hunt that saw limited edition prints being awarded to the first person to tap or scan in at each of 400 out-of-home advertising billboards located around Sydney and Melbourne.

Microsoft Australia has turned an NFC-enabled poster advertising campaign into a scavenger hunt, with the ads themselves serving as prizes.

The “Capture the Poster” interactive campaign was run earlier this month at 400 JCDecaux outdoor billboard locations in Sydney and Melbourne, to promote the launch of Halo 4, the latest instalment of the blockbuster Xbox game. 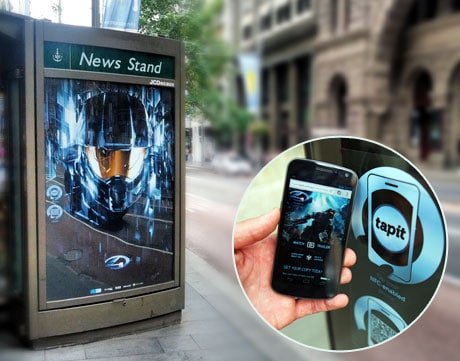 Each billboard featured an NFC tag and a QR Code, and competitors had to be the first to scan each poster after 1pm on Tuesday 6 November. Microsoft promoted the scavenger hunt on Facebook to more than 300,000 fans and provided an app that pinpointed the location of unclaimed posters. Winners were promised delivery of the poster they claimed, signed by Halo 4 creative director Josh Holmes, after the campaign finished.

Andrew Davis of technology provider Tapit explained to NFC World that the company’s backend system was configured with a time based function overlaid with a location based function to serve a ‘you’ve won’ page to the first claimant. This was followed by a second chance draw page for the next claimant. All subsequent taps took users to a Halo 4 microsite featuring a game trailer and other multimedia content.

“100% of posters were won,” says Davis, adding that the “average time spent on site was four minutes and 53 seconds and the most popular time of day was between 3pm and 7pm.”

The most popular ad sites were those close to transit, and especially train station platforms, which Tapit attributes to the high dwell time at those locations.