Support for a range of Android phones based on Samsung’s Galaxy S has been added to NFC supplier DeviceFidelity’s Moneto service. 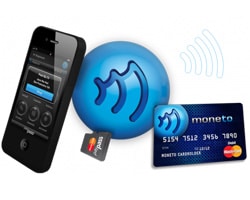 Launched last month with support for Apple iPhones, Moneto allows anyone in the US to buy an NFC add-on and use it to make payments via a MasterCard PayPass prepaid card account.

The new Android version costs US$29.95 and works with the Samsung Galaxy S i9000 (the unlocked international GSM version) as well as its US carrier variants the Vibrant, Fascinate, Mesmerize, Showcase, Galaxy S 4G and Epic 4G.

Moneto can be ordered online and comes with an NFC microSD, an NFC antenna signal booster sticker, a prepaid magnetic stripe plastic card allowing users to access ATMs nationwide and $10 preloaded onto the account. The accompanying Moneto app is downloadable from Android Market and includes a reload feature to add funds, a locator that lists merchants that accept NFC payments by zip code or current location, and will soon include card to card transfers as well as integrated cash back offers.

“This line of Android phones is only the first of many to come,” says Youri Bebic, DeviceFidelity’s general manager for Moneto programs. “With more models slated for release in the next coming months, the Moneto brand will continue to expand and incorporate value added features to achieve a rich mobile wallet that streamlines and enhances the purchase process.”