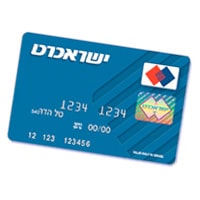 “This is the future. This technology will serve the entire market in the future,” Isracard CEO Dov Kotler told ‘Globes’.

The company announced that in the next few months it will issue to tens of thousands of customers a technologically advanced wireless credit card, or a wireless sticker, that attaches to the cell phone. This will allow them to make payments using Mastercard’s contactless system. Customers will be able to make payments by placing the card or sticker (and in the future their cell phone) next to the POS (point of sale) device. Isracard will upgrade the payment process during the second stage of the pilot, at Super-Pharm stores and Aroma cafes across Israel.

Bank Hapoalim and Lifestyle customers (Super-Pharm’s loyalty club) will be able to participate in the pilot. They will receive a sticker with the chip, which they will place on their cell phone, or a credit card with an antenna and the ability to transmit secure and encrypted credit card information.

Isracard will subsequently present other applications to provide benefits and discounts through the card or the sticker.