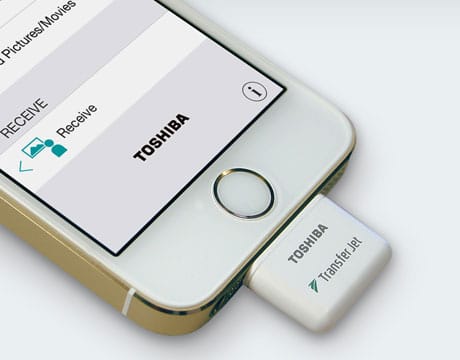 Toshiba has unveiled an add-on adapter for iOS devices that will enable users to transfer large data files such as movies and images from one device to the other using TransferJet, a high-speed short range contactless communications technology.

The TJM35420LT adapter will be available in spring 2015 in Japan, followed by Europe, the Americas and Asia. “Users can use TransferJet after attaching the adapter to an iPhone, iPad or iPod with a Lightning connector and downloading the iOS app from the App Store,” Toshiba explains. “Users simply select the data file to be transferred on the screen of a mobile device and then touch the device against the receiving device.”

The company has also launched a second generation version of its USB-connected TransferJet adapter for Windows PCs and a new Micro USB-based module for Android devices. Both are expected to become available in the first quarter of 2015.