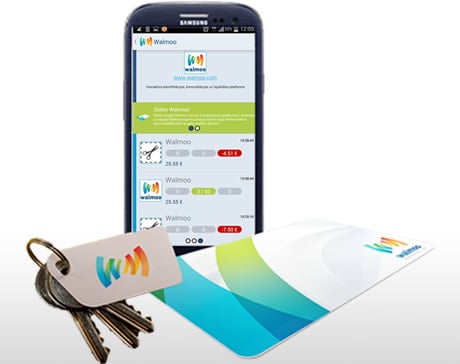 Latvian startup Walmoo has launched a mobile loyalty platform that uses standard NFC phones or tablets to provide customers with the ability to redeem coupons, discounts and offers. Ten merchants are live on the platform already and six ski resorts are to introduce the service early next year.

“We have the platform available on Android for merchants, so the terminal is a mobile application running on either an NFC-enabled smartphone or tablet and that works as a terminal,” Walmoo’s CEO Guntis Coders explained to NFC World+. “It scans NFC tags and QR codes as well. The other solution runs on a personal computer.

“For this solution, the PC acts as the terminal and the merchant just needs to plug an NFC reader into the PC. They need a web camera so that they can scan the QR codes as well, but everything is the same and it works on a web-based application. So all the merchant needs is either a tablet or smartphone terminal or a PC with the NFC reader and web camera.

“Merchants can have their own branded cards,” Coders continued. “At the moment, it’s the Walmoo mobile app that is used by the customers in all of the participating merchant stores. It’s one application so we’re not integrating into each merchant application. The idea here is that we can create a loyalty programme with one application that is not fragmented for everyone.”

“At the moment, it’s a standalone system in-store so the merchant conducts the transaction in the normal way through their existing point-of-sale systems, but on the side, the customer can tap a standalone terminal, either the tablet or PC, and the merchant can see who he is and what he can get,” Coders adds.

“We will be expanding from Latvia next spring or summer; we have partners in Russia and in England who are interested. The main reason why we’re spending time in Latvia now is to finish working with the skiing resorts project, and we are spending a lot of resources to get that right as it’s a very customised platform for them. We have ten partners, ten merchants already, and we’re signing up about two new ones a week.”