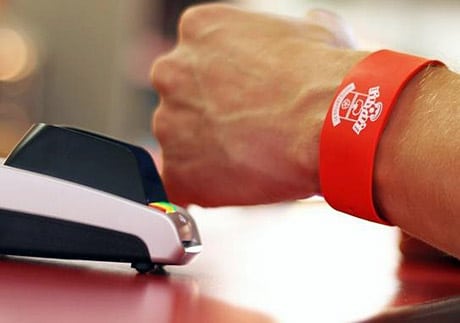 Barclaycard is to extend the functionality of its bPay contactless wristband to include access control as well as payments, the card issuer has revealed, beginning with the introduction of branded bPay bands for fans of Southampton Football Club that deliver a range of added value benefits to wearers.

“The Southampton FC bPay band will integrate contactless payments with exclusive loyalty offers, special experiences and prize draws for supporters,” Barclaycard says. “Southampton FC fans using the exclusive bPay band will be able to use dedicated ‘contactless bPay lanes’ on match day, allowing them to beat the queues at bars and catering outlets inside the stadium.

“Season ticket holders will also benefit from a range of “money can’t buy” offers on hospitality and memorabilia running throughout the 2014/15 season as well as special experiences and prize draws.”

“The partnership agreement aims to accelerate Barclaycard’s vision for the functionality of bPay band to be expanded to incorporate fans’ season tickets and stadium access, as it looks to develop an ‘all in one’ device that allows football fans to attend games with just a bPay band.”

The bands will also allow the club “to enhance the way it engages with its fans and look at ways to improve their match day experience, by changing anything from the food and drink it stocks to corporate facilities and the merchandise on sale in the club shop,” Barclaycard adds. 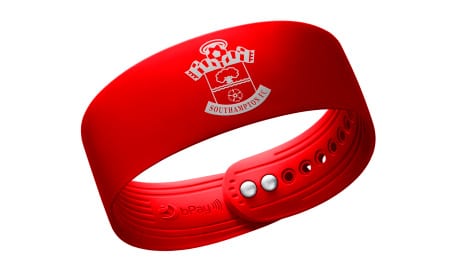 The bPay bands will be offered free of charge to fans and carry the club’s colours and logo.

“Our partnership with Southampton Football Club is an important next step in evolving our bPay technology into an integrated wearable proposition that does more than simply make payments effortless,” explains Mike Saunders, Barclaycard’s managing director for digital consumer payments.

“We are really excited to be working with Southampton FC as they have shown a clear vision for incorporating technology across the fan experience and a passion for growing their understanding of what’s important for Saints supporters.”

“We hope this partnership is the first of many opportunities in creating an integrated wearable device with benefits for both businesses and customers,” he adds.

10,000 free bPay bands are also being made available to commuters in London, Barclaycard announced last week. The move coincides with the rollout of contactless payments on the London Underground and lets wearers pay transit fares by tapping their wristband to contactless ticketing machines at tube stations, on buses and commuter rail services. Customers of carriers EE and Vodafone can also pay for fares with their NFC phone.