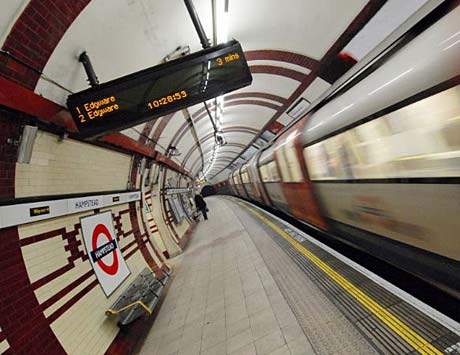 Users of mobile network operator EE’s Cash on Tap NFC payments service will be able to use their mobile phone to pay for travel on the London Underground, Docklands Light Railway and London Overground services from 16 September, when Transport for London (TfL) introduces the ability for passengers to pay for travel using contactless cards.

“The extension of Cash on Tap to TfL’s transport network will mean no more queuing to top-up an Oyster card, or rummaging around a handbag first thing in the morning,” EE says. “Cash on Tap will also avoid the issue of card clash — where gates may not open if customers have more than one contactless card in their purse or wallet.”

“The service will use EE’s free Cash on Tap mobile contactless payment service app, which is due to be compatible with over 500,000 customers’ handsets this year. There will be no added charges for using Cash on Tap to pay for travel, and both daily and weekly caps ensure customers won’t pay a penny more than using an Oyster card.”

Contactless payments were introduced on London’s bus network in December 2012, giving passengers the option of paying for travel with open loop contactless cards in addition to the existing prepaid Oyster cards issued by TfL. 825,000 passengers have used the service to pay for 17m bus journeys so far and around 65,000 journeys a day are currently paid for with a contactless card. The extension of contactless payments to the London Underground has been undergoing pilot testing since April 2014.

“The new option, which is part of a huge range of improvements TfL is making for customers, means that there will no longer be any need to spend time topping up Oyster balances because fares are charged directly to payment card accounts,” TfL says.

“Contactless payments — credit, debit, charge or prepaid cards or devices — work in the same way as Oyster, charging the pay-as-you-go fare by touching in and out on the readers at the start and end of every journey.

“In addition to daily capping, a new Monday to Sunday cap will also apply for customers using the contactless payment option, as TfL’s advanced system will automatically calculate the best value contactless fare over the course of the week.

“Only one charge per day will be sent to the bank or financial provider for payment — clearly referencing it as a payment to TfL for travel. Registered customers will be able to easily view their journey and payment history via their TfL online account.

“The account, part of TfL’s work to modernise and personalise the services that it offers customers, ensures ease and transparency and also gives customers the ability to obtain refunds on incomplete journeys.”

“TfL is continuing to remind customers that it is imperative that they only touch one card to the reader to avoid ‘card clash’,” the transport operator adds. “This simple measure will ensure customers avoid paying with a card they did not intend to use. It will also avoid gates not opening or not giving a green light to proceed.”

“If a reader at a station detects a contactless payment card and an Oyster card together, it will reject both and the gates will not open. Once the system is launched, if a wallet or purse containing a number of cards is touched on the yellow reader it is possible that the reader could detect one card without seeing the other and a card that the customers did not intend to pay with could be charged.”

“TfL and National Rail continue to work together to develop the programme to expand the system to the suburban rail routes where Oyster is currently accepted.”