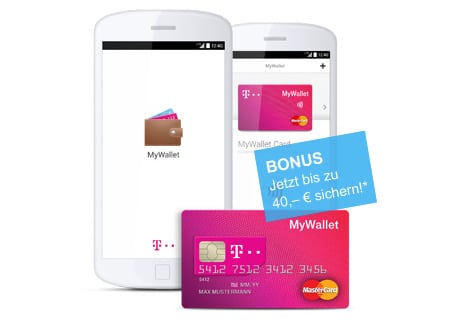 Deutsche Telekom has launched MyWallet, an NFC service that allows customers with any of 18 supported Samsung and Sony Android NFC devices to make payments at MasterCard PayPass merchants. The service is live in Germany today, will be launched in Slovakia this month and in Hungary later this year.

In Germany, supermarket chains Hit and Edeka are to begin issuing digital coupons that users can store in their MyWallet from June 2014. Transit and event tickets, membership and loyalty points are all to be added “in the future”, with the city of Bonn selected as the carrier’s main testbed for new applications.

Customers who sign up for the service will get an introductory bonus of up to €40, a companion card that can be used to make purchases at merchants not equipped to accept contactless payments, and a free NFC SIM card.

All MyWallet-capable NFC phones supplied by the carrier will ship with an NFC-enabled SIM from now on, Deutsche Telekom says, and contactless stickers are being made available to customers without an NFC phone.

6 comments on this article