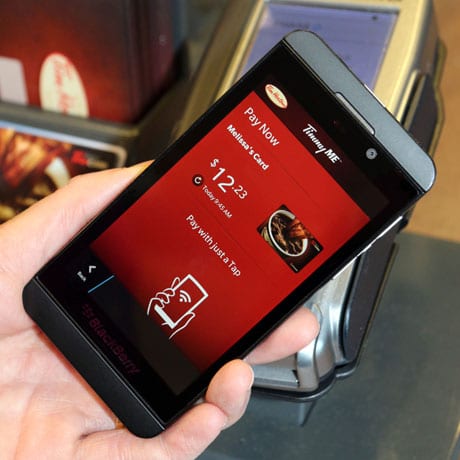 North American coffee chain Tim Hortons has launched an NFC mobile payments service using Host Card Emulation (HCE) at 3,500 locations in Canada and 800 in the United States. It is currently available to customers with BlackBerry 10 smartphones and support for Android phones will be added in January 2014.

To use the new Quickpay service, customers link their existing prepaid Tim Card to their TimmyMe mobile app. They can then use NFC to tap and pay at standard contactless terminals, regardless of their network operator. Their card balance is stored with payment processing company First Data.

“The app does use HCE,” Tim Hortons confirmed to NFC World. “The current offering is unique to BlackBerry 10 — including the Blackberry Q5, Blackberry Q10, Blackberry Z10 and BlackBerry Z30 smartphones. However, we are working towards an Android 4.4 KitKat launch slated for January.”

Google introduced support for Host Card Emulation (HCE) in October 2013, with the release of version 4.4 of Android KitKat, enabling any Android NFC device to be used for mobile payments and other secure applications without the need to have access to a secure element.

“We chose NFC because of the speed and convenience along with leveraging our existing infrastructure to deploy this mobile payment application,” Tim Hortons told NFC World. “This gave us complete control over the deployment of the system and further opportunity to grow our best-in-class customer experience.”

The chain has also launched a barcode payment pilot program in the Niagara region of Canada and at select US Tim Hortons Cafe & Bake Shop restaurants in Maine, Michigan, New York and Ohio.

The barcode technology, which provides a scan-to-pay option once a Tim Card has been registered on the TimmyMe app, supports Apple devices running iOS 6.0 or later and Android devices running version 4.0 or later.

16 comments on this article