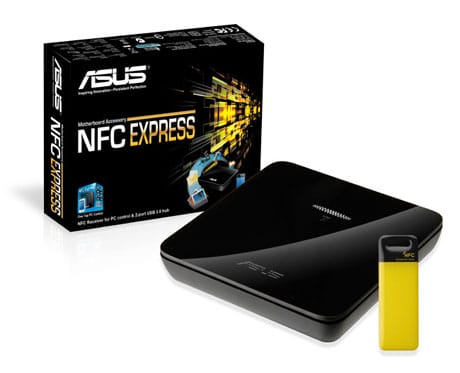 Asus has launched NFC Express, an external accessory for PCs that makes it easy to pair desktop computers and Android NFC phones and tablets so users can share data between devices and use their mobile phone as a remote control for their PC.

NFC Express is bundled with Asus’ new Z87-Deluxe/Dual motherboards and is also available to purchase separately.

“The Remote Desktop function allows for viewing and controlling PCs via Android smartphones and tablets, while Quick Launch saves shortcuts to favourite apps, which can then be started with the ease of a single tap.

“NFC Express also allows for password-free Windows 8 login, so users can go directly and quickly into the operating system.”

NFC Express connects to the host PC via USB, and “as an added bonus” incorporates two further USB 3.0 ports. The device also ships with an Asus-branded keyfob-style NFC tag.