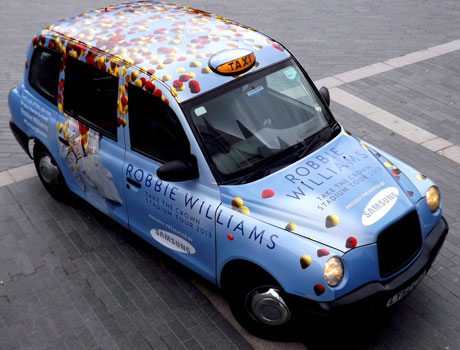 Samsung has launched a campaign to give Robbie Williams fans the chance to meet the star by simply tapping NFC tags located in black cabs in three UK cities.

For the campaign, run by VeriFone Media in partnership with NFC vendor Tapit, taxi cabs are being redecorated with promotional imagery for the singer’s Take the Crown tour and TV screens are being installed inside the rebranded cabs to show exclusive backstage footage of a previous tour.

Every 30 seconds a call to action appears on-screen that prompts viewers to tap their phone against one of the NFC stickers located on either side of the cab’s interior. When they tap, fans are directed to the competition web page where they can enter a draw to have the chance to meet Robbie Williams and win tickets to the gigs.

The promotion is now live in fifteen London taxis and will be rolled out to eighty cabs around the city as well as to cabs in Manchester and Glasgow.

The campaign is the first of its type in Europe, Tapit’s Niklas Bakos has told NFC World — and the company is now working with VeriFone “to install permanent NFC tags in hundreds, maybe even thousands, of black cabs in the UK meaning that any advertising company could make use of NFC tags in any campaign, because they will already be installed.”

Fans can also enter the Robbie Williams competition by taking a picture of the outside of a cab and tweeting it with a #SamsungRobbie hashtag, Bakos explained. “But, in my opinion, inside the cab is the best part of the whole campaign.”

“By showing people the video, it demonstrates how they use the NFC stickers in the cab and it also makes them more aware of the technology; it brings more attention to it.”