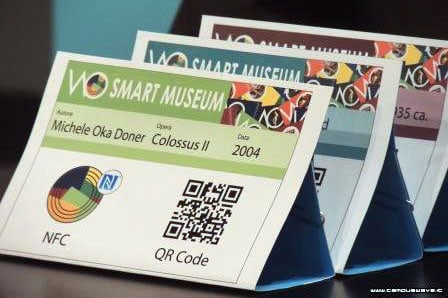 The Wolfsoniana Museum in Genoa, Italy is offering visitors a more immersive experience with the addition of NFC and QR code tags to eleven of its artworks.

By tapping an NFC smartphone to the tags or scanning the QR code, in-depth information about the artwork and its creator appears on the phone through a downloadable Wolfsoniana application.

Visitors can choose between two multimedia paths through the museum; one is designed for children, so the information given is much simpler, and the other is designed for adults.

At the end of the journey, they are invited to play a game using NFC that quizzes them on what they have learnt.

Andrea Caridi, business development manager at Darts Engineering which implemented the system for the museum, told NFC World: “Using NFC is really simple compared to the QR code system; that is not so simple. You have to position your phone in a correct way and it isn’t always easy. For users, it seems that NFC is a much better option.

“We have been working on this project since 2011, when we didn’t really use NFC-enabled smartphones in Italy. It is a new technology that is giving us a great opportunity to give the public such a modern and advanced experience”.

The museum is part of the PALM-Cities project, which investigates the use of NFC and contactless technologies to distribute personalized content to mobile devices.