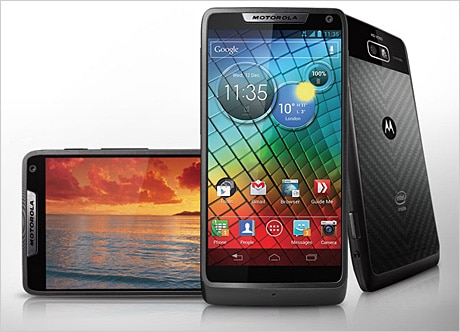 A new NFC phone from Motorola is a variant of the Droid Razr M, announced earlier this month, with an Intel processor at its heart instead of the M’s dual core Snapdragon S4.

The Motorola Razr i has a 4.3-inch edge-to-edge display and an Intel Atom CPU which can run at up to 2GHz. The device will ship with Android 4 Ice Cream Sandwich, with the Google-owned phone maker promising a Jelly Bean upgrade in due course.

“Razr i also features near field communication technology so you can send contacts, links, maps and more directly to compatible phones with Android Beam,” says Motorola. “Just hold the phones together and tap the screen.”

The Razr i features an aluminium frame and Kevlar back cover, along with a Gorilla Glass screen and “a splash-guard coating — even on the electrical boards inside.” The phone also boasts 20 hours of battery life in average use, and an 8MP camera.

The Motorola Razr i will be available from October in the UK, France, Germany, Argentina, Brazil and Mexico, with further markets to be announced later.