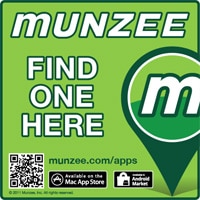 The service was launched in July 2011 and NFC tags are now being added to the existing QR code option “to allow for more creative hides in the environment, attached to a restaurant menu or behind a movie poster,” the company says.

Munzee reports that, in the year since the service launched as a marketing and rewards platform, 1m QR code captures have been registered, there are more than 174,000 Munzees in 35 countries and rewards have included an Xbox 360 console and a tablet computer.

A video produced by Munzee shows the service in action: