Sets of five TecTiles can be ordered online or bought in store for US$14.99 from all four major US carriers and can be used to program a variety of NFC-initiated functions. “Most of the tag types you make will work on nearly all phones which have NFC hardware,” says Samsung.

Samsung has launched an own label range of NFC tags and an NFC programming application for its range of Android-based NFC phones.

The new Tectiles NFC tags are available for US consumers to purchase in sets of five for US$14.99 online and in-store at AT&T, Verizon, Sprint, and T-Mobile — all four of the major US carriers — as well as direct from Samsung.

The companion Samsung TecTile programming application, which is available to download free of charge from Google Play, will allow consumers “to automate everyday functions of a smartphone including sending a ‘headed/at home’ text message, silencing the phone when entering a meeting, setting an alarm, and dimming the display when going to bed,” says the company.

“Tectiles will transform how businesses large and small engage with consumers,” the handset maker adds. “On premise, Tectiles enable consumers to check-in on Facebook or Foursquare, connect to WiFi or download content. Off-premise, businesses can use Tectiles as a way to market to and engage with consumers by enabling reward programs and to download discount offers or content.”

“With millions of NFC-enabled Samsung Galaxy smartphones currently in the market and the arrival of our flagship device Galaxy S III, Samsung saw an opportunity to expand the value of NFC beyond mobile payments,” says Dale Sohn, president of Samsung Telecommunications America. “The launch of Samsung Tectiles is another example of Samsung’s ability to innovate new products and applications that improve the way we use our mobile devices for everyday tasks.”

The full list of functions users can set up with the new tag platform includes:

TecTiles can be reprogrammed as often as needed, or permanently locked to prevent any future changes.

“Most of the tag types you make will work on nearly all phones which have NFC hardware,” says Samsung, although “a few types will only work on phones which have the Samsung TecTile application installed; examples are phone settings and launch an app.” 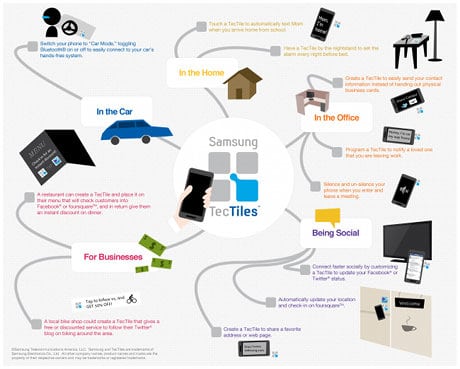