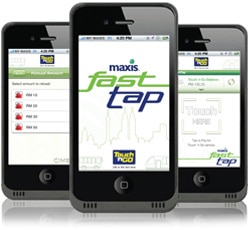 Maxis FastTap, launched in April 2009, was the world’s first commercial NFC service but until now has only been available on early Nokia 6212 Classic feature phones and has not gained widespread adoption.

The new iPhone NFC service is to be offered in conjunction with CIMB Clicks, the online arm of CIMB Bank.