CorFire, the American arm of Korean NFC specialist SK C&C, and US prepaid card provider InComm are working together on a mobile payments and offers service that would compete with Isis and Google Wallet, Bloomberg reports:

The partners’ technology will let merchants issue mobile wallet applications, containing prepaid, gift and bank cards and coupons, under the retailers’ own brands. Customers will download the apps from the Web or from Internet app stores to their smartphones, and use them to pay at cash registers. 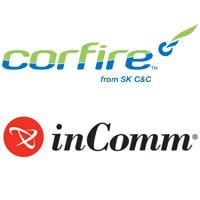 Retailers will be able to tailor a ‘wallet’ for their customer base and thereby make it more attractive than generic offerings, Dustin Young, vice president of product strategy for InComm, told Bloomberg:

Each merchant will also be able to customize the wallet to emphasize loyalty or gift cards, or daily deals. A merchant can also choose to let a consumer pay and redeem coupons by scanning bar codes or by tapping their phones on cash registers enabled for a technology called near field communication. Those registers can accept payment from NFC-enabled phones like the Google Nexus S.

“We believe that consumers will gravitate toward merchants’ wallets because they will offer value above and beyond what others offer,” Young said in an interview.

Adoption by large nationwide merchants will be key to the partners’ success. The first merchant wallets based on their technology should be announced in the fourth quarter, Young said.

Further details on exactly what InComm and CorFire plan to offer will be available in the near future. “We will be making a formal announcement about the partnership with CorFire in the coming days,” an InComm spokesperson has told NFC World.