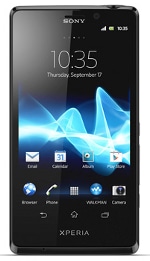 The device, currently the flagship in Sony’s range, was seen being used by James Bond in 2012’s Skyfall.