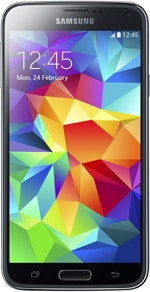 The Galaxy S5 is Samsung’s flagship device for 2014/15, and boasts improvements that include a fingerprint sensor that can be used to authenticate payments.

The Galaxy S5 was announced on 24 February 2014 and will be available globally in black, white, electric blue and copper gold from April.