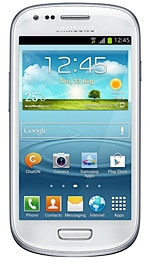 The S III Mini features a 4-inch 800 by 400 pixel display, along with a 1GHz dual core processor and a 5MP camera that shoots 720p video.

The S III Mini was announced in Frankfurt, Germany on 11 October 2012 and became available in early November. The device retails from around £260 (US$415) SIM-free.

An LTE version of the device is available in the US as the Samsung Galaxy Axiom on the US Cellular network, where it comes pre-loaded with Google Wallet.

Update The Galaxy S III Mini is shipping without NFC in many markets, despite it originally being announced as including the technology. According to Engadget’s review of the S III Mini:

Our UK retail model does not support NFC. Nor do any of the other European territories (Sweden, Norway, Germany, Belgium, etc.) where it is currently available. We’ve asked Samsung for clarification on which territories will get the advertised NFC, but for now it’s worth checking your local Samsung site just in case.