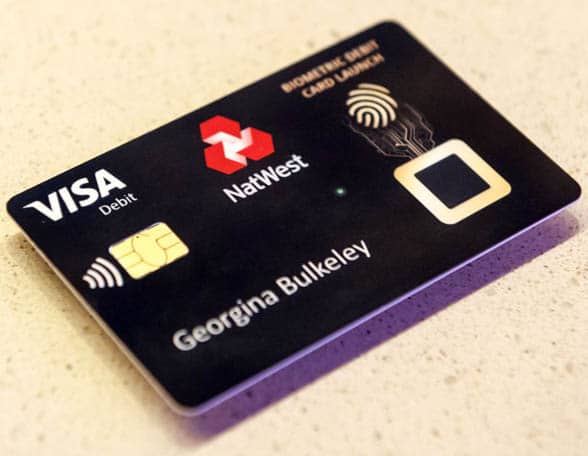 NatWest Bank has begun a three-month pilot of bank cards incorporating a fingerprint. In all, 200 cards will be issued to UK customers who will be able to use the fingerprint scanner to authenticate contactless transactions above the current limit of £30.

Once the cardholder’s fingerprint has been stored on the card’s chip, they can make contactless payments of up to £100 at existing POS terminals.

The fingerprint can also be used instead of a PIN to authenticate higher value payments when the card is put into a terminal.

The fully integrated cards can be used as normal in ATMs and for digital banking. They also work with existing contactless and chip and PIN terminals so shops can accept payments without updating their technology.

The cards are provided by Gemalto and uses Fingerprints’ T-shape sensor module and newly announced software platform for payments.

Their ultra-low power consumption means they do not need a battery, since they borrows power from the contactless POS terminal. The biometric capability ensures both security and convenience for the shopper, the company says.

When announcing the trial in March, NatWest’s head of effortless payments David Crawford called it “the biggest development in card technology in recent years”.