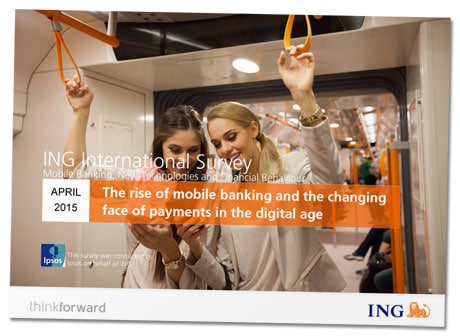 Some 185m Europeans will use a mobile payment app this year, up 51% on 2014, a survey of 14,000 consumers for ING has revealed, and respondents say they are far more likely to use apps associated with their bank for mobile payments (59%) over ‘named groups’ such as Apple or Google (39%).

Mobile device owners in Turkey (56%) and Poland (43%) are leading the way in embracing mobile payments, showing a higher adoption rate than the US (42%).

“The global market for mobile payments is reported to be growing rapidly and what we’re seeing is a major shift in consumer attitudes and behaviour to support that growth, though not everyone is convinced about moving to a cashless society just yet,” says ING senior economist Ian Bright.

The survey found mobile banking users say the technology helps them feel “more in control” of their finances, he added, with almost half giving that response – the most frequently cited of all options.

“While physical cash still has its place in society, mobile payment apps are giving consumers greater freedom when it comes to managing their finances. The instant visibility offered by mobile banking also means more consumers feel in control of their finances, claiming to have avoided missing payments and keeping on top of bills.”