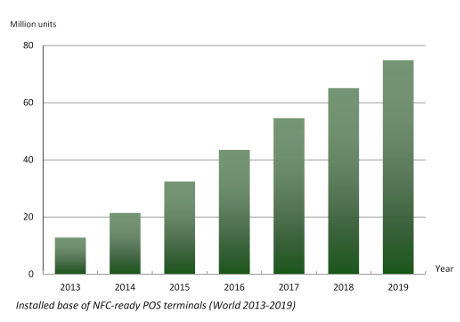 An estimated 9.5m NFC-ready point-of-sale (POS) terminals were shipped worldwide in 2014, research from Berg Insight has revealed, and the company forecasts that the global installed base of NFC-ready POS terminals will grow at a compound annual growth rate of 28.4% from 21.4m in 2014 to 74.9m in 2019.

The highest shipments for NFC-ready POS terminals recorded last year were in Europe and North America, where 80% and 75% respectively of the devices shipped featured NFC. On a global basis, two out of every five POS terminals shipped last year included the technology.

“The chicken and egg problem is here no more”

“While the installed based of NFC-ready POS terminals has grown quickly, the contactless technology has, in many cases, not been activated,” Berg Insight explains. “This is now changing and Berg Insight estimates that approximately 9m POS terminals accepted contactless payments with Visa PayWave, MasterCard PayPass or UnionPay QuickPass at the end of 2014.

“This is a major increase from 2012, when just 2.6m POS terminals worldwide had the contactless features enabled.”

“In short, we have reached a tipping point, the chicken and egg problem is here no more,” Lars Kurkinen, senior analyst at Berg Insight, told NFC World. “The awareness of contactless has been there among a large share of merchants for years. Adopting contactless just makes a whole lot more sense for them now due to several factors.

“Prices for NFC-ready POS terminals have come down significantly. Major POS terminal vendors such as VeriFone and Ingenico have, for a couple of years now, included NFC as a standard feature in essentially all newly-released POS terminal models.

“Issuing banks in many countries have started to roll out contactless cards in large volumes, so there actually is a fair number of people that have contactless cards and know how to use them. It is now clearer than ever that NFC will have a central role in mobile wallet services.”