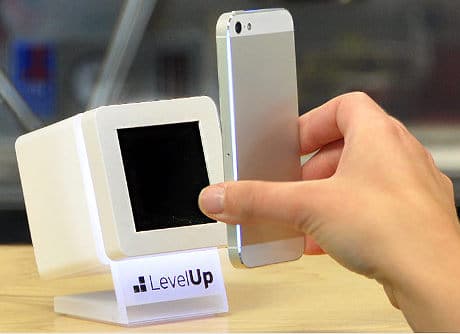 US mobile payments service LevelUp is to provide its merchants with the ability to push offers to shoppers via Bluetooth Low Energy (BLE) beacons built into the next version of its POS device. The move follows a pilot with 20 merchants in Boston which saw participating retailers experiencing a 22% lift in the volume of LevelUp transactions made by customers.

As a first step, LevelUp is now offering its 14,000 merchants a free LevelUp iBeacon that they can use to notify customers of exclusive offers and remind them of upcoming loyalty rewards.

“The next generation of LevelUp scanners are being produced now and will have compatible BLE technology built right into the scanners,” the company says.

“By analyzing data from hundreds of our merchant partners, we have found customers typically spend up to 2540% more than average when they know they are about to unlock a loyalty reward,” Seth Priebatsch, CEO of LevelUp, claims.

“Building iBeacon support into apps built on the LevelUp platform will help customers stay apprised of their upcoming rewards and help businesses earn more through their loyalty programs.

“Brick and mortar businesses used to lack the intelligent tools of ecommerce giants like Amazon. Mobile payments have enabled local businesses to track customer spend and deliver unique offers to individual customers like never before. Now with iBeacon functionality, businesses using LevelUp can also communicate with customers during their crucial decision-making process.”

LevelUp, which is backed by Google Ventures, originally launched as a QR code-based payment solution. It added support for NFC in September 2012.