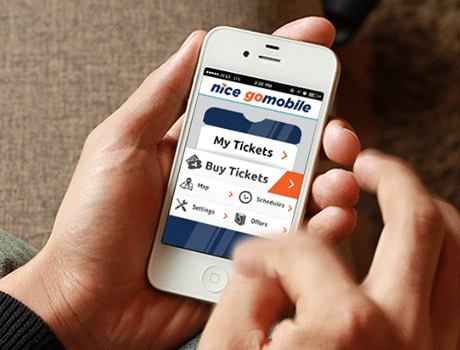 Riders will be able to use the GoMobile service to buy bus tickets from their mobile phone, using either a debit or credit card, and then activate the ticket as they board the vehicle by showing the visually verifiable ticket on their smartphone to the operator. For added security, mobile tickets will also feature scannable barcodes for occasional spot checks by NICE officials.

“Mobile ticketing is the first step in NICE’s evolution,” the companies say. The next step is a multi-format reader that NICE is currently testing on one vehicle that it hopes to test on several units over the summer.

The readers are format agnostic, meaning they are capable of accepting barcodes, contactless cards, proximity smart cards such as student or employer ID cards, and emerging payment technologies such as Bluetooth Low Energy.

“Mobile ticketing is really taking off in the US and NICE is excited to be at the forefront in bus transit,” says CEO Michael Setzer. “In the coming months, we look forward to rolling out additional technology initiatives that will help transform transit in Nassau County.

“Over the decades fare collection for Nassau County’s buses has evolved, however one area that has not changed much is cash payments. With GoMobile, we are taking a big step to improve that situation.”