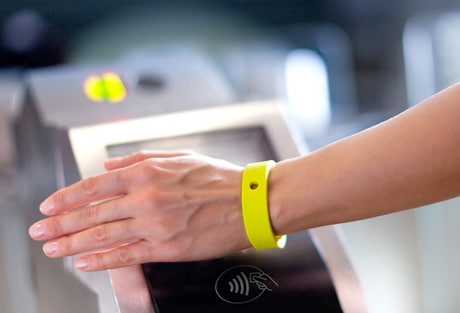 “It is operated in Moscow in Russia now,” Radaev explained. “We have a micropayments wallet attached to the wristband. People use it for in-campus payments, for buying things from vending machines or corporate cafeterias.”

“We are testing compatibility with some transportation systems and loyalty systems at the current moment. We have some special proposals for them — we can turn any wristband into a discount card and attach some social mechanics. For example, only a merchant’s Twitter followers or Facebook page ‘likers’ can get a discount.”

Apps are also being developed by independent service providers, such as universities and office campuses, financial institutions and transportation companies. Developers can also order a Mobispot demonstration kit with API tools to build their own features.

“We provide access to our APIs in a restricted way — if there is a case, we supply the developers with the appropriate documents free of charge,” Radaev explained. “Later, I think in about two to three months, we will make our API docs public.”

The wristbands typically contain Mifare Plus chips and cost in the region of US$15 to US$17. Other chips, such as Mifare DesFire and Sony Felica, can also be incorporated in the bands “depending on the territory and local transport applications”, Radaev added. Both key fob and card formats are also available.