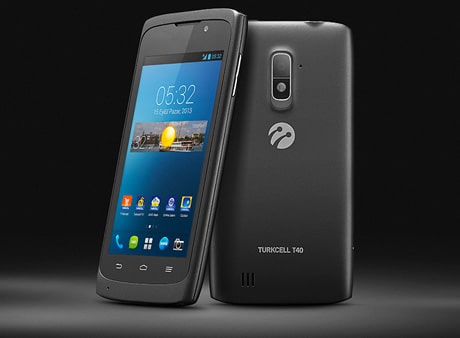 Turkcell has unveiled the T40, an NFC smartphone designed and manufactured in Turkey. The device runs a customised version of Android 4.1 Jelly Bean and includes a five megapixel camera and 4-inch LCD display.

The T40 was trailed at the Mobile World Congress in February 2013, when it was revealed that the carrier was working with Qualcomm to develop a “local” smartphone referred to as Gebze — the name of the town where Turkcell’s research and development centre is based.

At the time Turkcell’s CEO Sureyya Ciliv stated that “it is possible to ensure that TRY500 million remains in Turkey’s pocket for each one million units of local smartphones sold.”

The T40 is powered by a Qualcomm 8225 1.2GHz dual-core processor with 4GB RAM. Its main camera includes zero shutter delay and face detection and is paired with a front-facing 0.3MP shooter. Weighing in at 135 grams, its 1600mAH battery offers a claimed 240 hours of standby and 480 minutes of talk time.