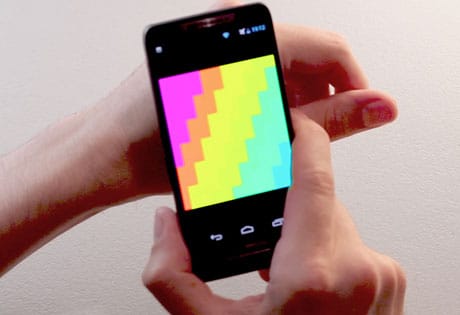 Digital artist Anthony Antonellis has embedded an NFC-compatible RFID chip in his hand as a way of sharing his artwork with others.

The 1KB chip was implanted between Antonellis’ thumb and forefinger and holds an NDEF message containing a URL that points to a website which hosts a small animated GIF image. The chip also contains the image as a downloadable file, says the artist, which can be read or replaced using an app.

“The artwork will be rotated out to exhibit new artists and artworks on a regular basis,” Antonellis says. “Future artworks may come in various file formats such as GIFs, JPGs, Midi music, or Ascii art.

“An Android app in development allows for direct download of the GIF from the chip, displays extended information about the artwork, and contains an archive of previously exhibited works.”

A video — graphic and not for the faint hearted — shows how the chip was inserted in Antonellis’ hand and how the information stored on the chip can be read with an NFC phone: