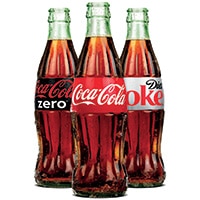 “More than one-third of active Isis Mobile Wallets users in Austin have loaded a My Coke Rewards card into their wallet since our pilot began and 90 percent of these are new to the My Coke Rewards program,” Rick Kanemasu, from Coca-Cola North America‘s vending technology strategy team, has revealed as the Isis NFC mobile payments venture announces plans to go live across the US this year.

“Coca-Cola is engaging with new and existing customers as never before and we look forward to expanding nationwide with Isis later this year.”