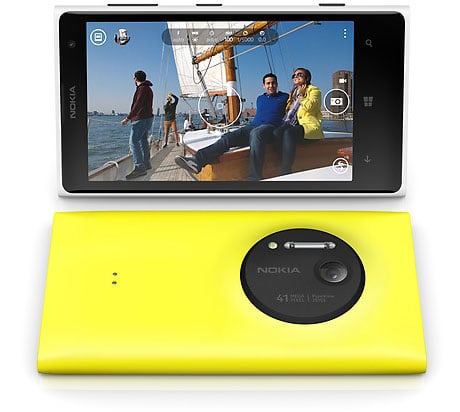 The Nokia Lumia 1020, the Finnish phone maker’s latest NFC handset, boasts the largest image sensor in a smartphone with a 41 megapixel PureView camera.

Unveiled today at Nokia’s Zoom Reinvented event in New York, the Lumia 1020’s impressive camera will also be able to shoot 1080p video at 30fps using six Zeiss lenses — the most in a smartphone.

With Nokia’s new camera app, Nokia Pro Camera, users can zoom out of an image even if they’ve snapped the shot while zoomed in.

“You’ll see things with this device that you’ve never seen before. The Nokia Lumia 1020 will change how you shoot, how you take pictures, and more,” said Nokia CEO Stephen Elop. “With the 1020, you can zoom into details that you can’t even see with your eyes.”

With a 4.5-inch PureMotion HD+ display, running on a 1.5GHz dual-core Snapdragon processor and 2GB RAM, the Lumia 1020 will initially launch in the US on 26 July for AT&T customers at US$299.99 with a contract. Other global markets will get the Windows Phone 8 handset in the third quarter of 2013.

A snap on case will be available for wireless charging and a camera grip with built in battery, shutter button and tripod mount will retail at US$79.99.