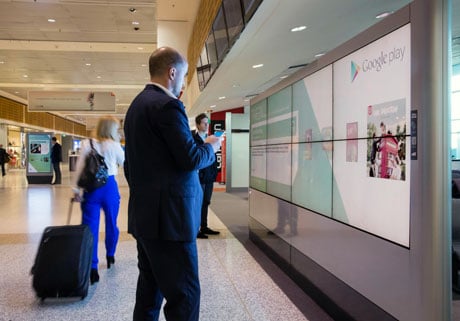 Google is running an NFC and QR code based digital advertising campaign in airports around Australia, allowing travellers to use a smartphone or tablet to take control of Google Play video ads on giant screens.

The system uses Red Crystal, software that creates an interactive session between a smart device and a large screen without the need to download any software.

“The Google Play campaign is Ooh’s most unique use of NFC, QR and Red Crystal technology to allow consumers to control a screen without needing to download an app,” says Warwick Denby, group director of business strategy at Ooh. “They can select the content they want displayed on the big advertising screens and then download movies, magazines, books, music or games from the Google Play Store immediately to their Android device.”

“Back in 2002 when Minority Report featured a scene where billboards talked directly with individual consumers, this was only the stuff of science fiction.

“This campaign is a real example of how the traditional billboard and technology can work together to gain a deeper connection between a brand and individual. It demonstrates how well online and digital billboards work together, and how smartphones can drive engagement and enable consumers to connect and transact with the brand online — immediately.

“We believe this signals the start of something really remarkable for how companies market to the consumer”.

A video produced by Ooh! shows the campaign in action: