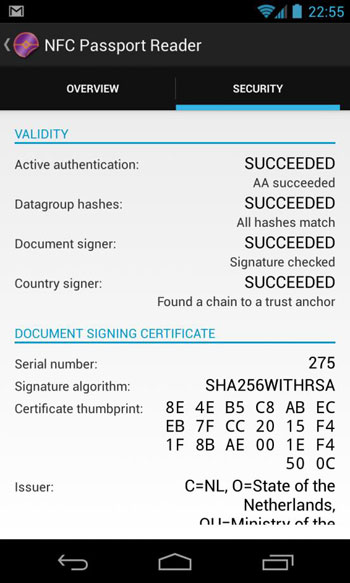 NFC Passport Reader uses NFC to read the chip embedded in a passport and can then verify its authenticity using the ePassport Java library JMRTD, which can check the passport’s validity by verifying a digital signature on the information held in the chip.

Novay’s Maarten Wegdam believes the app has a number of advantages. “Consumers can use the app instead of a PC or laptop with a USB smart card reader attached. The latter is expensive and user unfriendly,” he says.

“Professionals that need to verify the identity of someone in a face-to-face situation, a car rental organization or a public notary, can use the app instead of more expensive dedicated hardware-based solutions.”

Wegdam also says the app can be used as an added form of remote authentication for situations such as when installing a mobile banking app on a smartphone and verifying the user’s access rights to an account.

Although NFC Passport Reader is now available to download, the Novay team stresses that its current form should be considered a prototype. Future features are expected to include using the smartphone’s camera to read the document number, date of birth and expiry date so the user doesn’t have to type them in.