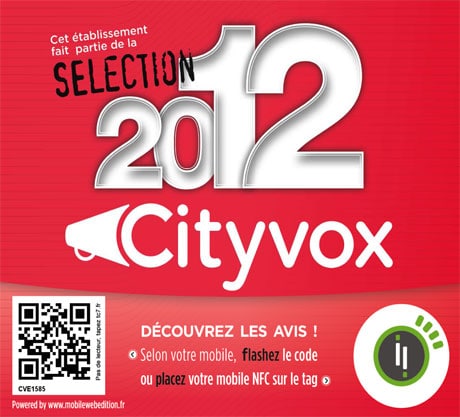 1,553 restaurants in 133 towns across France, voted by users of restaurant reviews site Cityvox as their favourites throughout the country, are being provided with interactive window stickers that let diners access Cityvox customer reviews via their NFC phone. The “2012 Cityvox Selection” stickers also include QR codes for those without an NFC device.

“For 12 years Cityvox users have discovered, suggested, tested and then recommended places to go out all over France,” platform provider Orange Business Services explains. “They elect their favourite restaurants which are then rewarded with the Cityvox 2012 label… The restaurants selected by web users earn a Cityvox 2012 red vignette which can be seen in restaurant windows.”