Video coverage of the launch of Apple’s first mobile wallet app shows how it will enable developers to build mobile barcode-based ticketing, stored value, loyalty card and coupon apps for today’s iPhones — and hints at how these apps could migrate to NFC in the future.

Apple has made available full coverage of the keynote presentation at its World Wide Developer Conference, in which the iPhone maker unveiled a new mobile wallet application called Passbook which will be available with the launch of iOS 6 later this year. 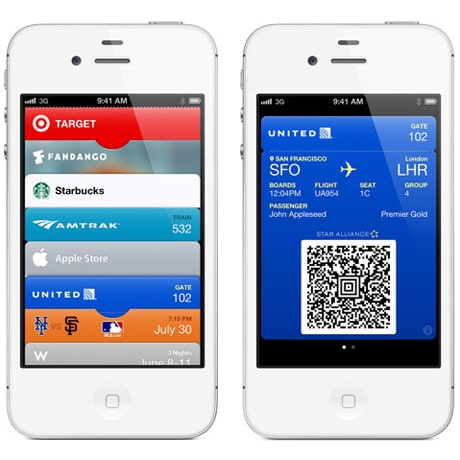 Described as “the simplest way to get all your passes in one place”, the video suggests that Passbook is designed to work with both current and future Apple devices and to be as technology agnostic as possible — opening up the potential for developers to begin building Passbook-enabled apps now that will work with both today’s iPhones and a possible future NFC-enabled iPhone.

Beginning at 93:03 minutes into the keynote, Scott Forstall, Apple’s SVP for iPhone software, shows how Passbook will work straight away with a range of different types of barcodes. Applications from Starbucks, Target, United Airlines, Amtrak and movie theatre ticket seller Fandango as well as the Apple Store were all on show.

“Passbook takes all of these passes and combines them together in one place — and integrates it right into the OS,” Forstall explained.

“We’ve developed templates to make it really easy for all you developers to build these great passes and tickets and it integrates right in with the lock screen. So, when you get to the movie theatre, your ticket automatically pops up on the lock screen. Slide across here, scan it in, go in.”

The current balance on stored value cards, such as those issued by Starbucks, is available to view from within the Passbook app, Forstall explained, and the mobile wallet will also include support for coupons and hotel express check-in cards.

Passbook-enabled apps are also integrated in with both the phone itself and the lock screen, Forstall added, allowing Passbook to make use of the phone’s geolocation capabilities to automatically bring up a relevant card or ticket when it is needed. “So, if I have my phone locked, and I go to my favourite Starbucks,” Forstall said, “up comes my Starbucks card, slide across it, brings up my card, scan, pay for my coffee and I’m out. It’s that easy.

“And all these cards are actually live,” he added, demonstrating that an airline boarding pass app could automatically alert the user to a last minute change of gate number.

All the barcode-based applications on show, however, were “closed loop” services which tend to have lower security requirements than the “open loop” services provided by card networks such as MasterCard and Visa.

A beta version of iOS 6 for developers is available to download today for members of the iOS Developer Program.