The Russian mobile network operator is providing customers in the city of Yekaterinburg with the ability to store bus, tram and metro tickets on either a mobile phone with built-in NFC or a SIM+antenna add-on that works with standard handsets.

Customers in the city can make use of the NFC service via either a mobile phone that comes with built-in NFC functionality or a SIM+antenna solution that works with standard mobile phones. 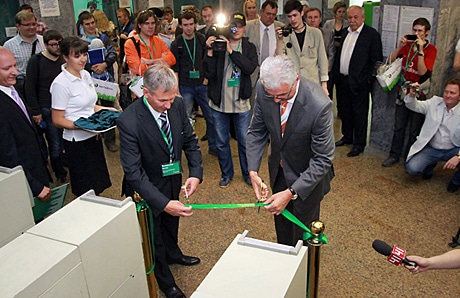 They will then be able to use their phone to access all of Yekaterinburg’s public transportation network, including the metro, trams, buses and trolley buses — a total of 1,600 transportation vehicles.

In the new service, tickets and passes are purchased in advance of travel and delivered over-the-air to customers’ phones, Megafon’s Dmitry Smirkin has told NFC World. “Tickets are bought not at the time when a handset is placed in the vicinity of a reader, but earlier,” he explained. “The data about the bought tickets is stored directly in the SIM card together with information security software”.

“Currently, a USSD menu is used for buying tickets and checking the account balance,” Smirkin added. “In several weeks this will be supplemented by an Android application that is at the final stage of development.”