The company’s new Liquid Express NFC smartphone supports both tag reading and mobile payments — and, the company says, NFC will now be included in all its future Android phones. 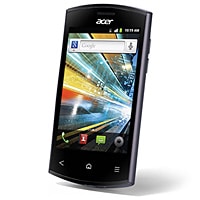 Acer has launched a new smartphone that includes NFC technology. The Acer Liquid Express has a 3.5-inch screen, a Qualcomm MSM7227 processor running at 800MHz, a five megapixel camera with LED flash and runs Android 2.3 Gingerbread. The handset will be available first in France, on Orange, from 23 November.

“The Acer Liquid Express marks the start of the implementation of NFC technology as standard in Acer smartphones,” says the company. “From this model, all the company’s Android smartphones will be equipped with this technology of the future.”

NFC is a priority for the company, says Augustin Becquet, development director at Acer France, “because there are so many uses for the technology: payments, transport, ticketing, loyalty, cultural information, local government information… we haven’t yet begun to explore the thousands of applications that will be uncovered.

“Even if, today, contactless technology is only beginning to become widespread in France, it is important that consumers include this feature in their purchasing criteria,” he added.