Twitter chairman and cofounder Jack Dorsey is working on a new start up that is developing an iPhone attachment which will enable iPhones to be used to make payments, according to recent reports.

Believed to be called the Square iPhone Payment System, the project was first reported by tech blog Mashable last month along with a photo of an early prototype: 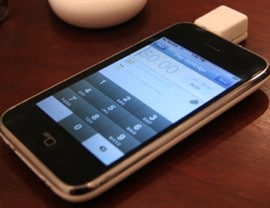 Dorsey is now believed to have secured funding to take the project forwards. According to Silicon Alley Insider:

A source in the investing community tell us Square’s Angel round was the “hottest i’ve seen.” He tells us, “lots of people are mad they didn’t get an allocation.”

So who are the lucky VCs that did? We don’t have a full list, but our source says, “obviously [Twitter investor] Union Square [Ventures] is involved.”

The news follows yesterday’s report that Apple is believed to be testing its own RFID-enabled iPhone.