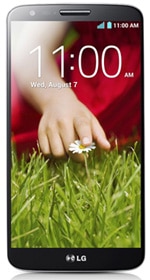 The LG G2 is the an Android smartphone with NFC, and is the Korean phone-maker’s 2014 flagship device.

The device features a 5.2-inch full HD display and, uniquely, has its volume rocker and power buttons on the back, below the rear camera, because the phone maker realised from user studies that “that the larger the phone became, the more difficult it was to properly access the side keys.”