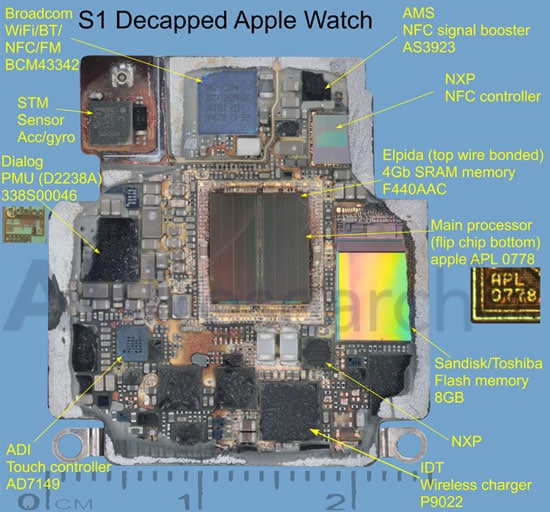 A teardown of the Apple Watch shows a design centred on a custom processor with NFC components from NXP and AMS, ABI Research has revealed.

The device includes NFC so that wearers can make Apple Pay contactless payments by simply presenting their watch to a POS terminal.

Like the iPhone 6, the Apple Watch contains AMS’s AS3923 NFC signal booster and an NFC controller from NXP. A Broadcom BCM43342 handles WiFi and Bluetooth. Other chips include a combination accelerometer and gyroscope from STMicroelectronics and a touchscreen controller from Analog Devices.

“The design is an obvious variation from Apple’s smartphones, with many high-end functions and chips included that normally would not be found in a simple watch,” says Jim Mielke, VP of engineering at ABI Research and head of the company’s TeardownIQ group.

“Judging by the complexity of the printed circuit board (PCB) and the number of parts on the PCB, one might think the Apple Watch is a full-fledged cellular connected watch but in fact connectivity is limited to WiFi, Bluetooth and NFC.”