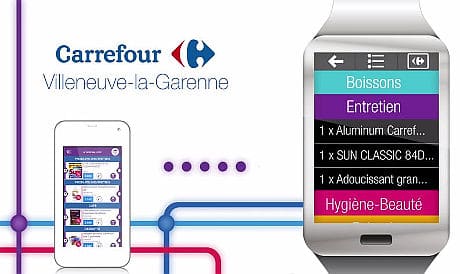 Customers at a Carrefour hypermarket in Paris are now able to use their smartwatch to access their digital shopping list, tick off items as they go and receive loyalty points when they check out.

The service is an extension of the mobile shopping experience launched by the French retail giant in 2014, which saw the store become one of the first in the world to make use of NFC shelf edge labels on every aisle.

Shoppers at the Villeneuve-la-Garenne store are able to tick off items on their shopping list by swiping the screen of their smartwatch, which synchronises to their smartphone using Bluetooth.

Using the C-où mobile app developed by Think&Go, customers can prepare a shopping list ahead of their visit using their smartphone, and then view the same list from their smartwatch.

A handful of customers were given a sneak preview of the service before Christmas, and it is now available for those using a Samsung Gear S smartwatch and a compatible Samsung phone. The app will also be available for smartwatches using Android Wear in the next few months.

“Carrefour wanted us to do an extension experimenting with the smartwatch,” Tim Baker, marketing director at Think&Go, explained to NFC World. “The idea is if you’ve got a smartphone in your hand, you’ve only got one hand to handle the trolley, open the fridge and deal with the children, if there are any.

“With an extensional shopping list, you just start the application and you find the shopping list on your smartwatch which means you’re now handsfree, you can put the telephone in your pocket, they’re connected by Bluetooth, you shop, you tick off the items on your watch, they’re checked off as well on your phone and vice versa, and you go around and do your shopping like that.”

A video (in French) shows the service in action:

“The initial roll out we did was with the Samsung Gear S,” Baker added. “Now Android Wear has come out, we’re now putting it onto all Android watches. Because the C’ou application already works on iPhone, doing the same adaption to the Apple Watch will be just a matter of redoing the same thing under a different operating system.”