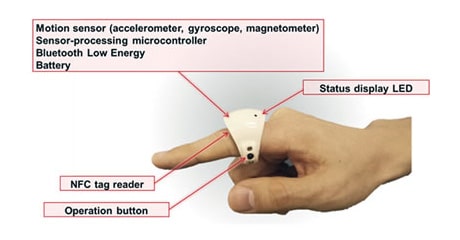 Fujitsu Laboratories has developed a wearable ring-style device targeted for use by factory and building workers that offers a handwriting-in-the-air functionality and NFC to enable the lookup of relevant documentation and instructions with a tap of a finger.

“The ring-type wearable device can be used to enter numbers and take notes using handwriting in the air,” the company explains. “In addition, an NFC tag reader enables the operator to tap on a tagged object to display the appropriate information on a relevant operation’s details or instructions.

“By writing in the air with one’s fingertip, operators can select menu options or make memos on photos that they take in the field. Fujitsu Laboratories developed handwritten character input and recognition technology that uses motion sensors built into the ring to trace the movements of the operator’s finger.

“By applying proprietary technology that corrects the letterform tracings, Fujitsu Laboratories has been able to improve character recognition accuracy, enabling recognition of everything from numbers to Chinese characters.”

The device weighs less than 10 grams and also incorporates an accelerometer, gyroscope and magnetometer, as well as a BLE radio.

“Each component has been optimally laid out to minimise the size of the device and power-saving technology enables the usage of a button cell battery, which also contributes to the miniaturisation of the device. To begin air-writing, the operator uses their thumb to press an operation button which makes it easy to operate using just one hand without operation errors.”

“Because operators do not need to hold devices in their hands to receive information in the field, there are especially high expectations for the use of such wearable devices in fieldwork for which operators need use of their hands at all times,” Fujitsu adds. “Fujitsu Laboratories is testing the real-world usability of the device in the field with a goal of practical implementation during fiscal 2015.”

The company showed off a glove-style device offering similar functionality at Mobile World Congress in 2014.