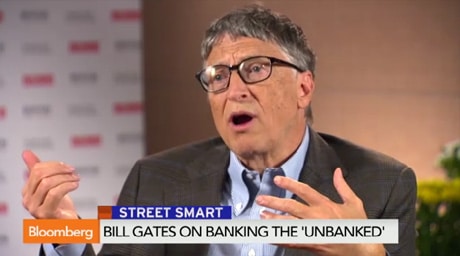 “Apple Pay is a great example of how a cell phone that identifies its user in a pretty strong way lets you make a transaction that should be very, very inexpensive,” Microsoft founder Bill Gates has told Bloomberg TV.

“So the fact that in any application, I can buy something, that’s fantastic,” he explained. “The fact that I don’t need a physical card anymore, I just do that transaction, and you’re going to be quite sure about who it is on the other end, that is a real contribution and all the platforms, whether it’s Apple’s or Google’s or Microsoft’s, you’ll see this payment capability get built in.

“That’s built on industry standard protocols, NFC, and these companies have all participated in getting those going, Apple will help make sure it gets to critical mass for all the devices.”

Gates made the comments in the context of the Bill & Melinda Gates Foundation’s work on providing access to financial services for the unbanked in the developing world.

“It’s all about helping the poorest and one thing they don’t have access to is bank accounts,” he said. “The fee structure via small amounts of money is just too high and we got involved in some traditional microlending but just didn’t see how that could scale up and get inexpensive enough.

“So, now we’re involved in trying to make sure we get a very efficient digital payments structure set up for all the poorest in the world to get financial products that work for them. The idea is that typically through the cell phone you should be able to send money to your relatives, you should be able to track the money that’s coming in, setting aside money to buy seeds the next year and there are countries where this is beginning to take off. Kenya, Bangladesh, even Somalia.

“It’s really the digital revolution. The poorest have bought cows, stored gold, put currency under their mattress but they are getting more cell phones and the cell phone capability of identifying who’s using the cell phone, letting you look at your spending patterns, that’s going to be common sense. People are going to have help and lots of innovative products competing on top of this digital currency platform.”

“Bitcoin is exciting because it shows how cheap it can be,” Gates added. “Bitcoin is better than currency. You don’t have to be physically in the same place, and of course for large transactions currency can get pretty inconvenient. The customers we’re talking about aren’t trying to be anonymous, they’re willing to be known, so Bitcoin technology is key and you can add to it or build a similar technology where there’s attribution and people feel comfortable.”

Asked if Gates has asked or considered asking Apple CEO Tim Cook to help him with this work, Gates replied “No”.

“The kind of basic things underneath aren’t the things that Apple Pay was involved in. Apple Pay will take anybody they’ve signed up for the payment instrument, so they’re not involved in driving the efficiency and the super, super low fees for low amounts of money. Now, of course, when we get these things as they branch out in other countries, having interoperability for people who happen to buy with their devices will be worth doing.”