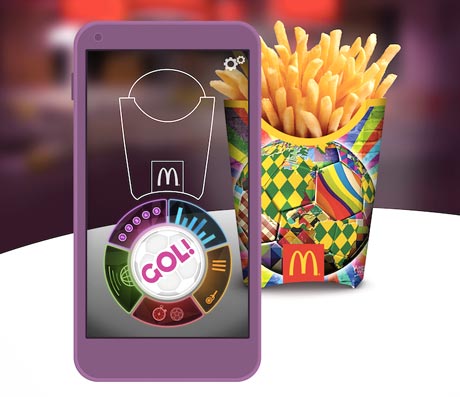 McDonald’s is set to roll out a new campaign for the 2014 Fifa World Cup using an augmented reality app to turn packaging and tables into virtual football games.

By scanning a fries box with a mobile phone that has had the McDonald’s Gol! app installed, the table where the box is placed will turn into an interactive pitch, viewable on the screen of the smartphone.

The box itself appears as a goal while other packaging, such as a burger box, will appear as objects that the player can use as ‘trick-shots’ to help them score goals.

The app will be available worldwide on both iOS and Android on May 26 and a video shows how the McDonald’s campaign will work:

The campaign was created by Trigger and DDB Chicago, and uses a new version of Qualcomm Connected Experiences’ Vuforia mobile vision platform that features Smart Terrain. This 3D reconstruction capability enables users to create their own play space where game characters interact with the physical world.

“This Vuforia app is just one example of how we are bringing fun to our customers’ lives,” says Atif Rafiq, McDonald’s chief digital officer.